Marla Austin is an extremely talented crocheter who has overcome adversity to become a  respected and accomplished crochet artist. 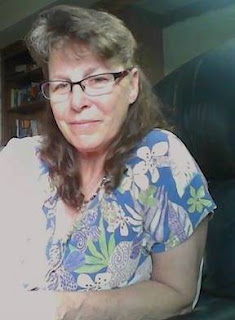 Marla's beautiful work is highly sought after; she sells her gorgeous pieces both through her Etsy shop and through an annual local event. She also takes custom orders for larger items, such as this magnificent bedspread she is currently working on: 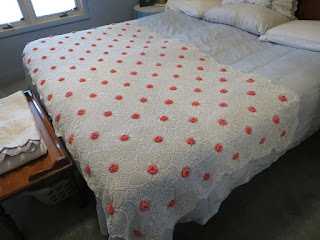 Marla tells how she began selling her crocheted work:
"In 2004, I was rescued from 2 years of homelessness by the kindness of a stranger, who turned out to be the best man I've ever known (other than my father). Unable to work and bored, I started crocheting, brushing off skills learned long ago as a little girl, quite literally, sitting on the floor at my Grandmother's feet. My first project was a queen-sized bedspread that used 2 strands of thread together,. By using two strands at a time, I was able to create six shades from three colors. It took a full year to make and turned out too heavy to use!
Not long after, a friend told me that the local arts center was putting together an exhibit showcasing area artists. At first, they weren't interested in doilies; that is, until they saw my work. I was so moved by their display that I knew I had to share my love for this beautiful art form with as many people as I could (and maybe make a little spending money on the side). Thus began my dream. In Dec. 2008, I became a vendor at the S.P.B.H. Folk Art Festival held in Libearl, Kansas and did so well my first year that it's become an annual event for me.( By the way, SPBH stands for "Society for the Prevention of Bored Housewives". I remember hearing about it when I was in high school in Garden City Ks.; its been around that long.) Now my dream is well on it's way. In fact, I guess you could say it's been fulfilled. Less than a month after opening my internet shop, my first item sold, and I became an international seller at the same time. "Every piece made with loving prayer" is the quote on the back of my business card and is literal. I thank God for the loving Grandmother who taught me this craft, for the skill I have since acquired, for the blessings God has given me. I hope and pray His peace and grace be with every recipient of my work." 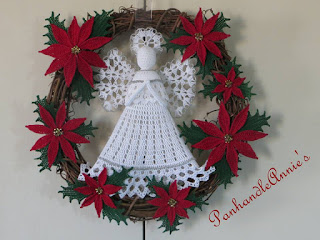 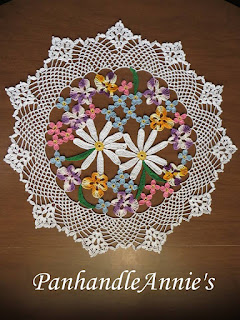 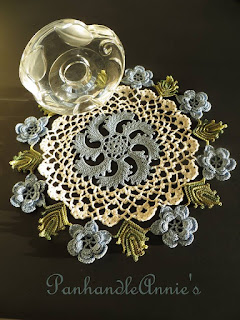 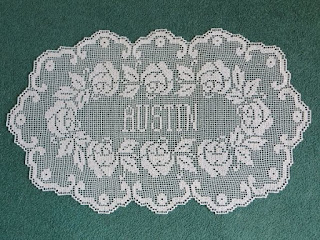 But, there is an additional reason that I admire Marla; she came across a solution that will set the dye in dark colored thread so that it does not bleed onto lighter colors. If you have ever had a red and white Christmas doily turn into a pink, blotchy mess after it was washed, then you know what I am talking about! Marla has generously agreed to share the recipe for this "Magic Solution" with us today:

Marla's Colorfast Solution
1 tablespoon salt
1 cup white vinegar
2 quarts water
Soak piece in solution until thoroughly saturated. Blot and block or finish as usual.
Some people rinse their pieces to remove any lingering vinegar aroma. I’ve never had a problem with any residual odor, and I don’t rinse afterward.
Store solution in a glass container.
NOTE: Marla says that the solution, MUST be stored in a glass container, not a plastic one. She uses canning jars to store hers. 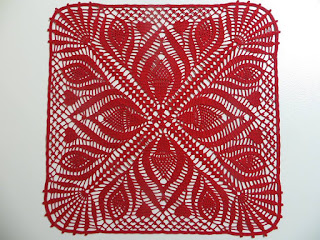 Thank you, Marla, for sharing your story and the recipe for the marvelous Colorfast Solution! It will certainly make life much easier for many of us!

You can see more of Marla's work in her Etsy shop:
panhandleannies

Ask to see Marla's gorgeous jewelry line. She is creating lovely pieces with metallic threads, beads, etc. Bracelets, necklaces, earrings.
I have a bracelet which she has done with florals, in rich autumn colors, and another one done in metallic bronze thread with gold beads. They have to be seen to be appreciated and you will love them even more in person.