The Doily That Got Away

I spent all last week working on a doily that I finally gave up on. This very rarely happens to me; usually I just keep working on a design until I get it right. But this one got the best of me.
It started out like all of my designs do; an idea and a sketch. I am working on my next Lovely Ladies Doily, which will be a little witch sitting on a crescent moon. I worked for 3 days to get the moon right, and instead of starting on the witch, (which I know is going to take some extra time to get right) I thought I would make the gift doily that is going to come with her. I thought it would take me a day, maybe two at the most.
I had an idea for a five-pointed star; each point of the star would be made of cluster stitches. The number of clusters on each point would decrease by one on each round; 9 on the first round, 8 on the next, etc. until I had just one cluster left for the tip of the point. Between each point I wanted to put a spider web design. Since it was to go with a Halloween doily, I would use black thread. I would call it the "Midnight Star" doily.  It all sounded good, and I was eager to get started on it.

The first attempt didn't look right, and since I had only one ball of black thread I ripped it all out and started over (sometimes I save pieces that don't work until the project is finished, just so I can see what I have already tried.) Dc clusters didn't look big enough, so I tried tr clusters. The doily cupped so I added more stitches to the base of the spiderwebs. (When a doily cups, or curls inwards, it means you do not have enough stitches in the round. If it ruffles, it means you have too many.) I tried everything I could think of to get it right, but nothing worked.
I cannot even guess how many times I ripped that thing apart and started over last week. My daughter called on Friday and asked what I was working on. When I told her, she said "You are still working on that doily? Is it really big or something?"
Finally, on Sunday morning I ripped it out for the last time, and decided to give up on it. There is just something about it that I am not getting, and I was tired of trying to figure it out.
So, yesterday, I started a new doily which I am calling "Trick or Treat," and I am happy to say that it is almost finished. But I will save my sketch of the Midnight Star, and maybe someday I will try again and finally  figure it out.
Posted by Ann at 7:06 AM 12 comments:

Sunflower Dish or Wash Cloth: a Free Crochet Pattern for You 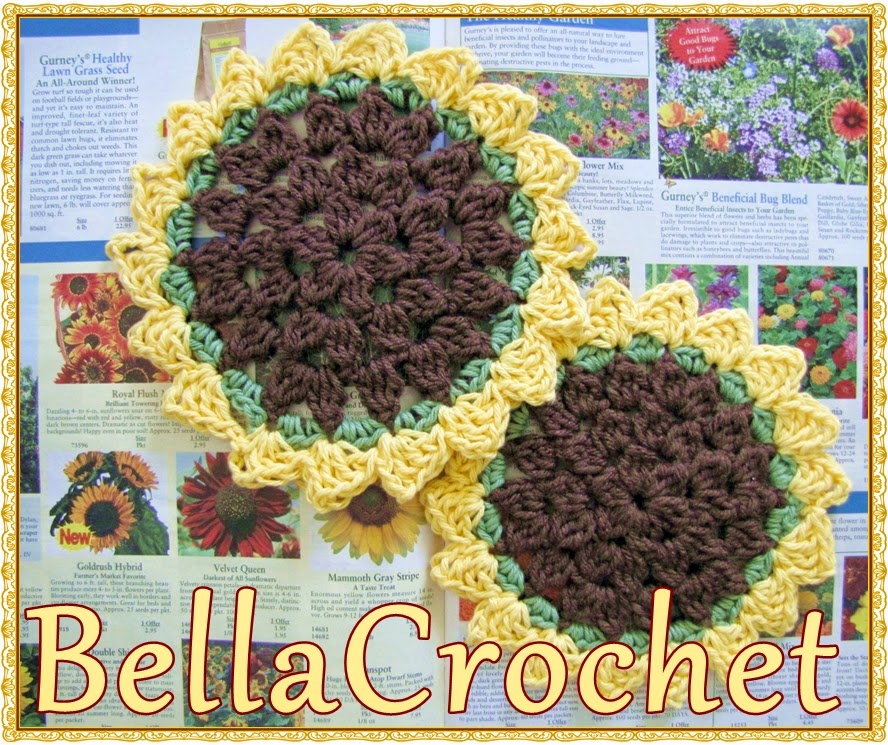 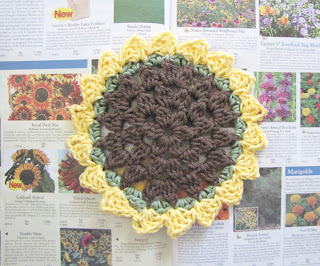 Special thanks go to Dena Casey for testing this pattern.

Copyright BellaCrochet 2010. All rights reserved. This pattern may not be copied, sold or distributed in any form or fashion.
Posted by Ann at 7:36 AM 13 comments: 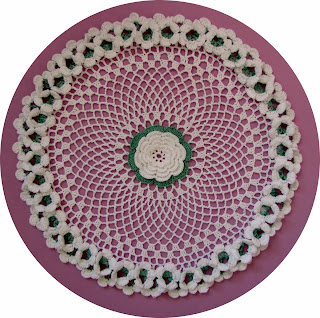 I am finishing up this doily, which I am calling "Annaleace" after my beautiful granddaughter, Lillian Annaleace. ﻿ 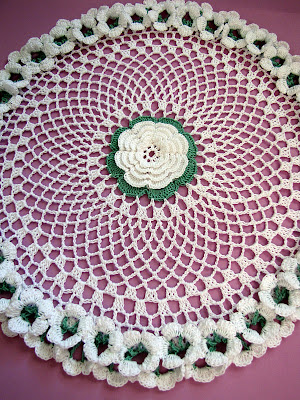 The "Annaleace" will be the gift pattern that will come with the purchase of the "Happily Ever After" bride and groom doily pattern.
I am working on the pattern today, and hope to have this set listed for sale on bellacrochet.com by the end of the month. Well, maybe the first of August. It has the same edging as my Wild Roses and Pineapples Doily and the Sweet Violets Potholder. I really love this edging, it looks complicated but it is so easy to make!
I am also working on a new free pattern to post here on the blog. I will try to post it by this weekend.
Posted by Ann at 7:47 AM 4 comments:

Coming Soon: Happily Ever After Doily I am doing the finishing work on this doily today, and will start writing the pattern tomorrow. The pattern should be available by the end of the month.
I started this design back in March, and I had hoped to have it ready by June, but it took longer than I expected to get it how I wanted it. I made 4 different arbors, and 3 different bride's dresses. I still have to do some blocking and finishing, but I am liking how it is turning out.
My next project: a witch sitting on a cresent moon. So far I have made 5 different attempts to make the moon. Ahh, the glamorous life of designing!
Posted by Ann at 8:23 AM 5 comments: