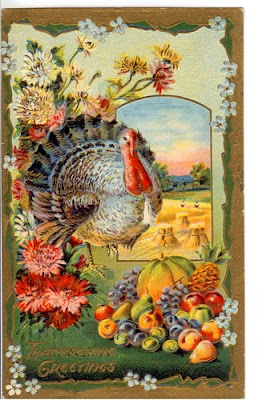 Wishing you all a day filled with Joy, Peace and Love. 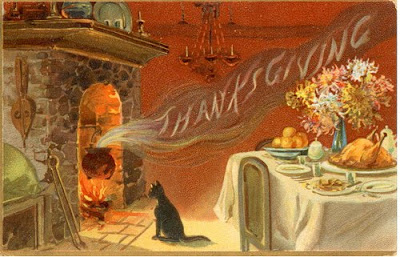 And lots of good food, too! (doesn't this look like a Halloween picture?) 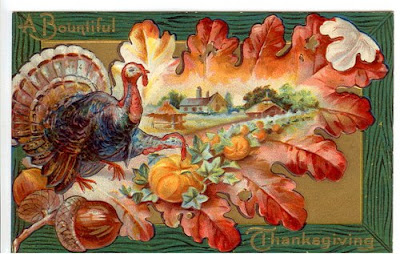 This Thanksgiving, I am especially grateful for my family, my friends, and my good health.
I will be out of town for the next few days, spending time with my loved ones.
I hope you all have a wonderful Thanksgiving!
Posted by Ann at 8:18 PM 3 comments:

Afternoon Stroll and Mavanee's Roses are in my Etsy Shop!

I have finally added "Lucy and Jack's Afternoon Stroll" to my Etsy shop. Close up of Lucy's head. 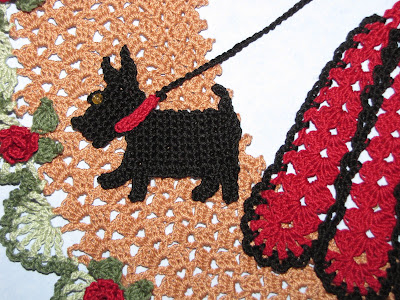 Close up of Jack. 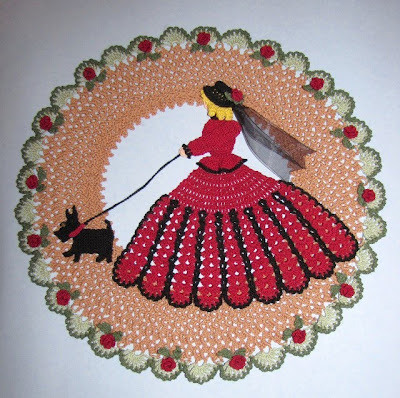 The finished doily. I am happy to tell you that it was picked up by the Annie's Attic catalog. 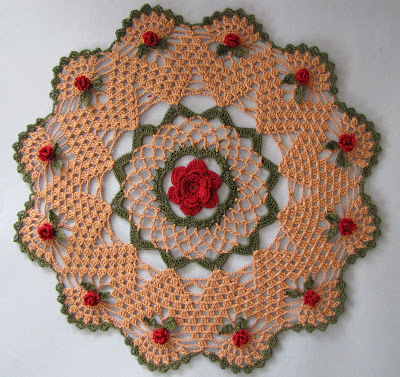 This is the gift doily with the purchase of Afternoon Stroll. I am calling it "Mavanee's Roses" after my mother. It is the second gift doily I made, I was not happy with the first one and had to start all over. (That is what took me so long to get this one out)
I am pleased with how they turned out. I have started work on the next doily in this series, which will be called Woodland Fairy. I will try to do a sneak peek picture this weekend.

Baby Bella and Sedona Wrap: Any Yarn Testers Out There?

I have three new yarn designs that are almost ready to go. Although I love thread with all my heart, and consider myself first and foremost a threadie, some designs just have to be made with yarn. Which is okay, I consider it a nice change of pace. 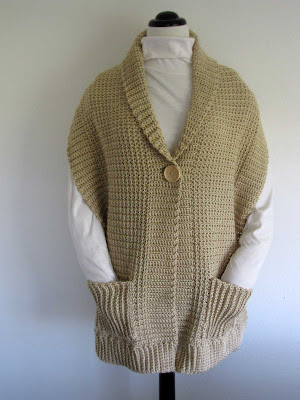 First up is the Sedona Wrap. It was really fun to make, and I like the one big button. It is One Size Fits Most and the skill level is Easy. The only thing even slightly challenging is the buttonhole, and to me the hardest thing was counting the rows to make sure I got it in the right place! 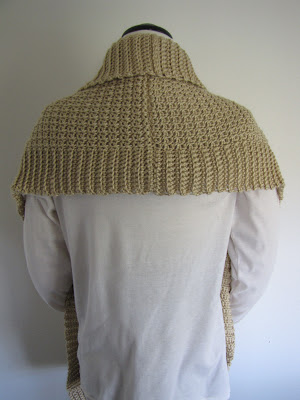 Next is the first set in my new "Baby Bella" series. Each set will include a cute, easy to make baby blanket and matching booties and a cap. This set is called "Twinkle, Twinkle, Little Star." 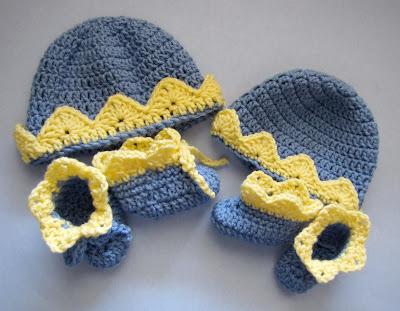 The cap and booties come in two sizes, Newborn-3 months, and 6-12 months. This set's skill level is Easy. I probably made 20 pairs of booties before I came up with one that is super quick to make but still looks cute! 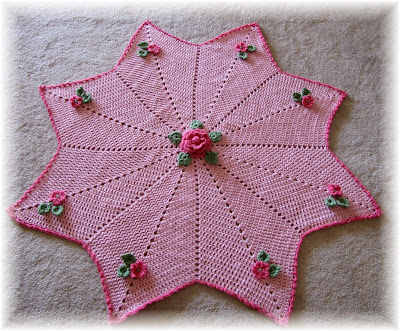 Here is the "Ring Around the Rosie" set.
So dainty and feminine! 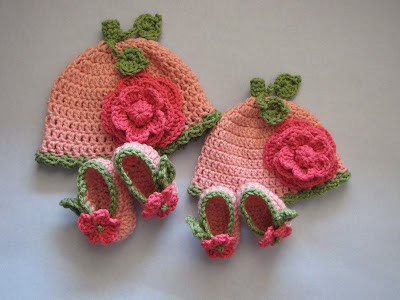 I love these little slippers, so sweet! Almost like little ballet slippers. This set also comes in sizes Newborn-3 months and 6-12 months, and the skill level is Easy.
I have had so many of you write me volunteering to test my doilies, and I truly appreciate each and every one of you! But I know some of you do not like to work with yarn, so I am asking specifically for volunteers to test these yarn patterns. I will finish up the patterns this weekend and should be able to send them out by Monday. If you would like to test one (or more!) of these designs, please write me at:
bellacrochet.info@yahoo.com.
I am changing the way I have my patterns tested a little bit. I will not be sending out the yarn for these projects (you will have to provide your own, but at least you will be free to use the colors of your choice!) I will provide the pattern for testing, then send you a corrected copy of the pattern via email when it is placed in my Etsy shop. You will also receive your choice of any pattern in my Etsy shop in appreciation for your time. The finished items will be yours to keep of course. I would love to see a picture of your finished item if possible. There are no geograpical limits on testers for these patterns, since I will not be shipping the yarn. I will need your feed back on the pattern by Dec. 14 (not a lot of time, I know, but these are all pretty easy and quick to make items.)
Please let me know if you have any questions. I hope to hear from you soon!
Posted by Ann at 9:48 AM 3 comments:

I have posted many times about how I love to see the doilies you talented crocheters create from my patterns. I never get tired of seeing them!
This week, Marie was kind enough to send me a picture of her version of the Pineapples and Wild Roses Doily, which I am now using as the gift pattern with purchase of my Flower Garden Fairy doily: 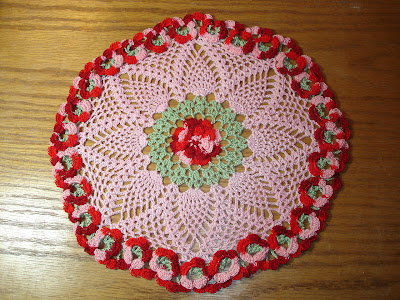 I love the way she used pink for the pineapple portion of this doily, and the beautiful shaded and pink and red thread she used for the roses. It is Omega thread color #128 Variegated Red, and she got it here: http://creativeyarnsource.com/crochet_cotton.html
I love their colors, and can't wait to try some!
And talented Jewel sent me three pictures. First is the Sweetheart Pineapple doily from the Butterflies and Roses Pineapple Doilies set: 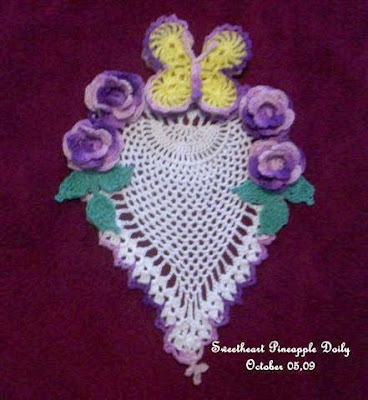 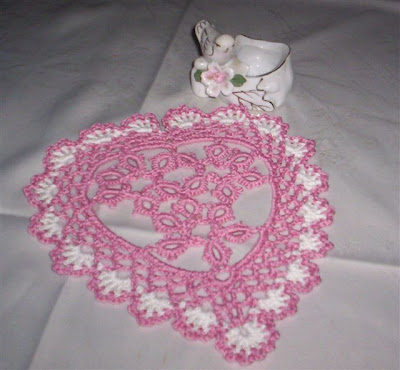 I felt like such a dummy; I actually had to ask Jewel if this sweet little heart was my design! In fact, it is one of the Cro-Tat designs I did for Annie's Attic several years ago. It was published in a book called "Delicate and Dainty Cro-Tat Doilies." 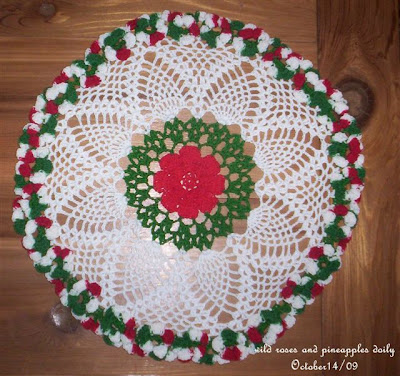 And finally, here is Jewel's version of the Pineapples and Wild Roses Doily, all done up in beautiful Christmas colors! So pretty!
Thank you both, Marie and Jewel for sharing your lovely doilies!
Posted by Ann at 8:56 AM 6 comments:

The Shoe Box: a Crocheter's Story For all of these years, he had never thought about the box, but one day the little old woman got very sick and the doctor said she would not recover.

In trying to sort out their affairs, the little old man took down the shoe box and took it to his wife's bedside. She agreed that it was time that he should know what was in the box. When he opened it, he found two crocheted doilies and a stack of money totaling $95,000. He asked her about the contents.

'When we were to be married,'  she said, 'my grandmother told me the secret of a happy marriage was to never argue. She told me that if I ever got angry with you, I should just keep quiet and crochet a doily.'

The little old man was so moved; he had to fight back tears. Only two precious doilies were in the box! She had only been angry with him two times in all those years of living and loving. He almost burst with happiness. 'Honey,' he said, 'that explains the doilies, but what about all of this money? Where did it come from?'

'Oh,' she said,  'that's the money I made from selling the doilies.'

This story has been around for a long time, but I still love it! Sometimes the old lady makes "dolls" instead of "doilies", but I like this version better. Thanks to my sweet daughter in law, Jewell, for sending it to me, and giving me a laugh today!
Posted by Ann at 8:34 AM 7 comments: 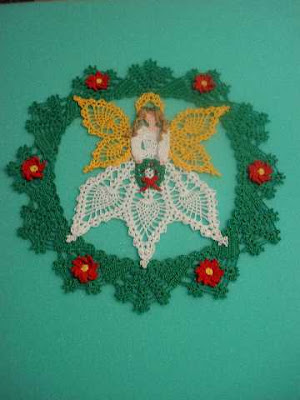 Talented crocheter Jenny has shared pictures of her "Tidings of Joy" and "Flower Garden Fairy" doilies. She did such a beautiful job on them both! 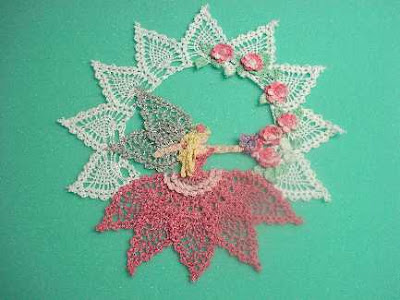 Flower Garden Fairy was the first in this series, and I have to admit, I think it is my favorite so far! 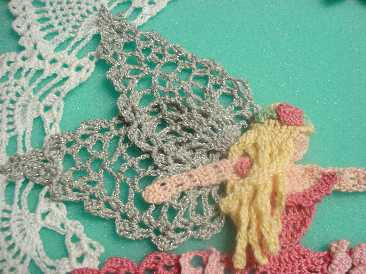 Jenny used silver thread for the wings; it gives quite a magical touch, don't you think? Thanks for sending the pictures, Jenny! They are gorgeous!
When I get my website, I plan to have a gallery section, to show all the beautiful doilies made from my patterns. Hopefully soon! 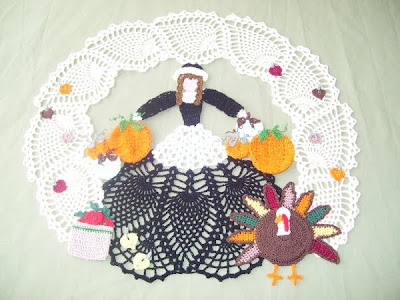 I love seeing what you creative folks do with my patterns. Just look how Jo Ann has changed "Harvest Moon" into a Thanksgiving doily! I love the little turkey! And look at the white pumpkins, and her pilgrim hat!
I have plans to do a couple of Thanksgiving themed doilies in the future, but I think Jo Ann has done a marvelous job with this one. Beautiful work, Jo Ann! Thanks so much for sharing it!
Posted by Ann at 11:32 AM 6 comments: