Spotlight on a Crocheter: Jennie Gaskin

Jennie Gaskin loves to talk crochet and says her involvement in crochet is precious to her. This is fortunate for all crocheters, since Jennie provides an invaluable resource for us all, especially the Threadies. Jennie owns and operates Country Yarns, a mail order business selling crochet leaflets and pattern books, and she specializes  in patterns that are hard (if not impossible) to find  elsewhere.

Here is a little background on me, in case some of you have no idea who I am , LOL! I have been a Threadie since the age of 12. I learned from my mother on size 30 thread, probably because she needed her size 10 for herself. I've been married and sitting on this 120 acres of pasture and timber for 45 years this coming April 4th.
Back in 1982, hubby decided I needed more adults to talk to so he built me a little needlework shop across the driveway from our house, using mostly leftovers from when we built our home back in '77. The lady in our tiny, tiny town who sold yarn in their general store had just retired and closed the store, so it was a good time to do that. The shop was only 16 x 24, and some of that was storage so there wasn't much room but it made me happy.
It wasn't long before we had to enlarge (and then enlarge again!)  after  I started carrying craft supplies for the groups (scouts, school, church, etc.) in our area. I was a Girl Scout from way back, and I knew how hard it could be to figure out crafts for the groups so I started putting together little inexpensive individual kits for the leaders. It was a blast, and I had so much fun over the years until I finally had to close the shop in 2007 for family reasons.  The best pats on the backs were from leaders and teachers; one teacher told me that her class "bad boy" came to her one day and thanked her for getting the kits to make beaded Christmas tree ornaments.
In the meantime I had become very friendly with the sales reps at LA and discovered that with the new ownership back then there had been changes in their reprint policies! Before, when inventory on a title ran low they would just do a reprint. Now, they discontinued many of their titles when inventory ran out. Ack! So I started watching their inventory list and started buying what I could afford of certain "good" titles, like the Patricia Kristoffersen titles and even older ones, especially thread titles because nobody seemed to be printing many anymore.
I also sell a large selection of Elizabeth Hiddleson pattern books.
Not everybody even knows who Elizabeth Hiddleson is. She was just a "threadie" like all of us, except that (like a few of us) she had a creative side and loved to fiddle with her doilies and turn out something new. Her son told me that she would come home from work (I think she worked as a bookkeeper in the shipyards in Vallejo, which is across the bay from San Francisco) and sit in her chair and crochet until time to start supper.

Thank you, Jennie, for sharing your story with us. I admire and appreciate all you have done for crocheters everywhere, and I know we all hope someday your dream of printing volume 50 will come  true!
You can find Jennie at:
Web site:  http://www.countryyarns.com
Blog:  http://countryyarnscrochet.wordpress.com/

Easter Garden Doily: A Free Crochet Pattern For You

Hidden deep in an enchanted meadow, the Easter Bunny has a secret garden. A magical garden where he grows his most lovely and special Easter eggs. He has given me permission to re-create his garden in crochet, and share the pattern with you. We hope you will enjoy it! 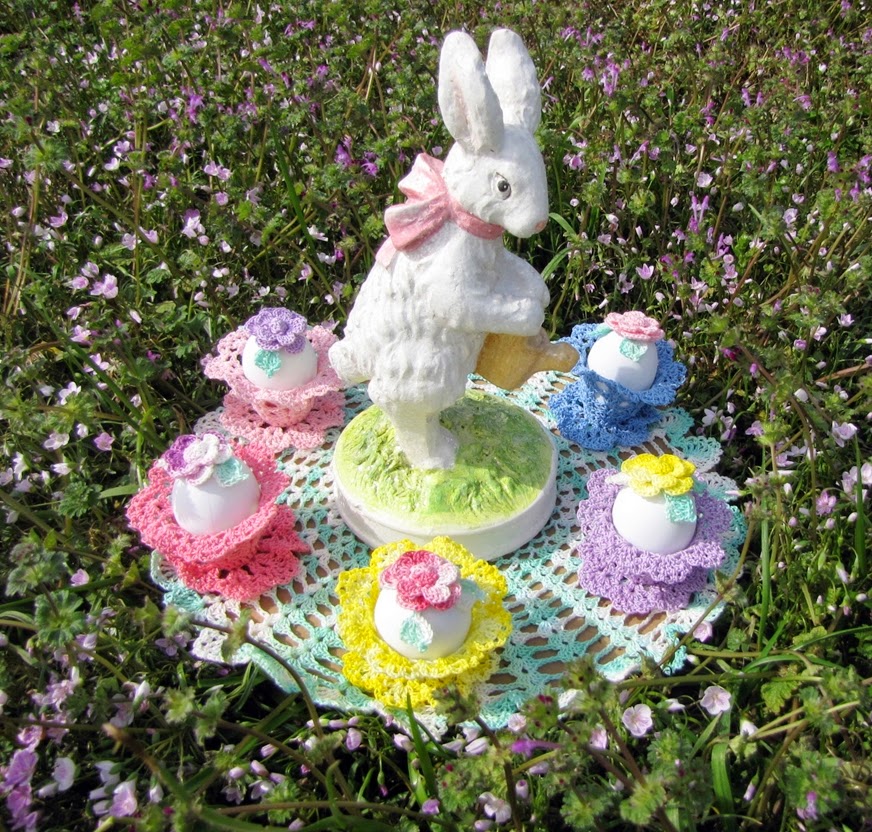 By Elizabeth Ann White
For BellaCrochet

Size: Doily is about 13” across. Flower Egg Holders hold a medium size egg.

Skill Level: Intermediate—for those who are familiar with working with size 10 thread and steel hooks, and who have a thorough understanding of the basics of crochet 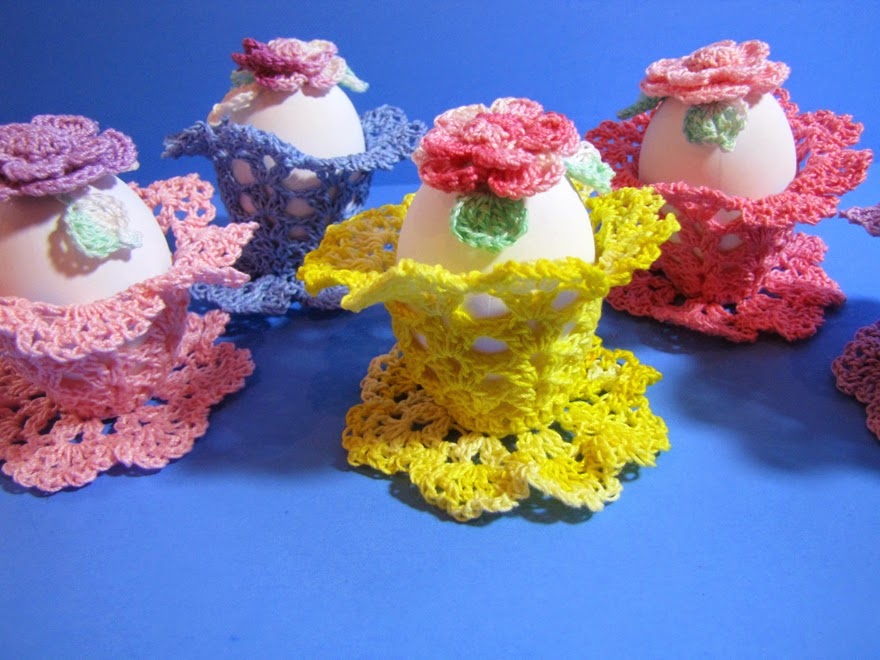 Copyright BellaCrochet 2015. All rights reserved. Please do not share or redistribute this pattern. It is for personal use only. You may sell items made from this pattern, but not the pattern itself. DO NOT make videos or tutorials of it for distribution on YouTube or any other site.
This pattern has been tested for accuracy and clarity, and I can offer no additional information, photos or help with it. 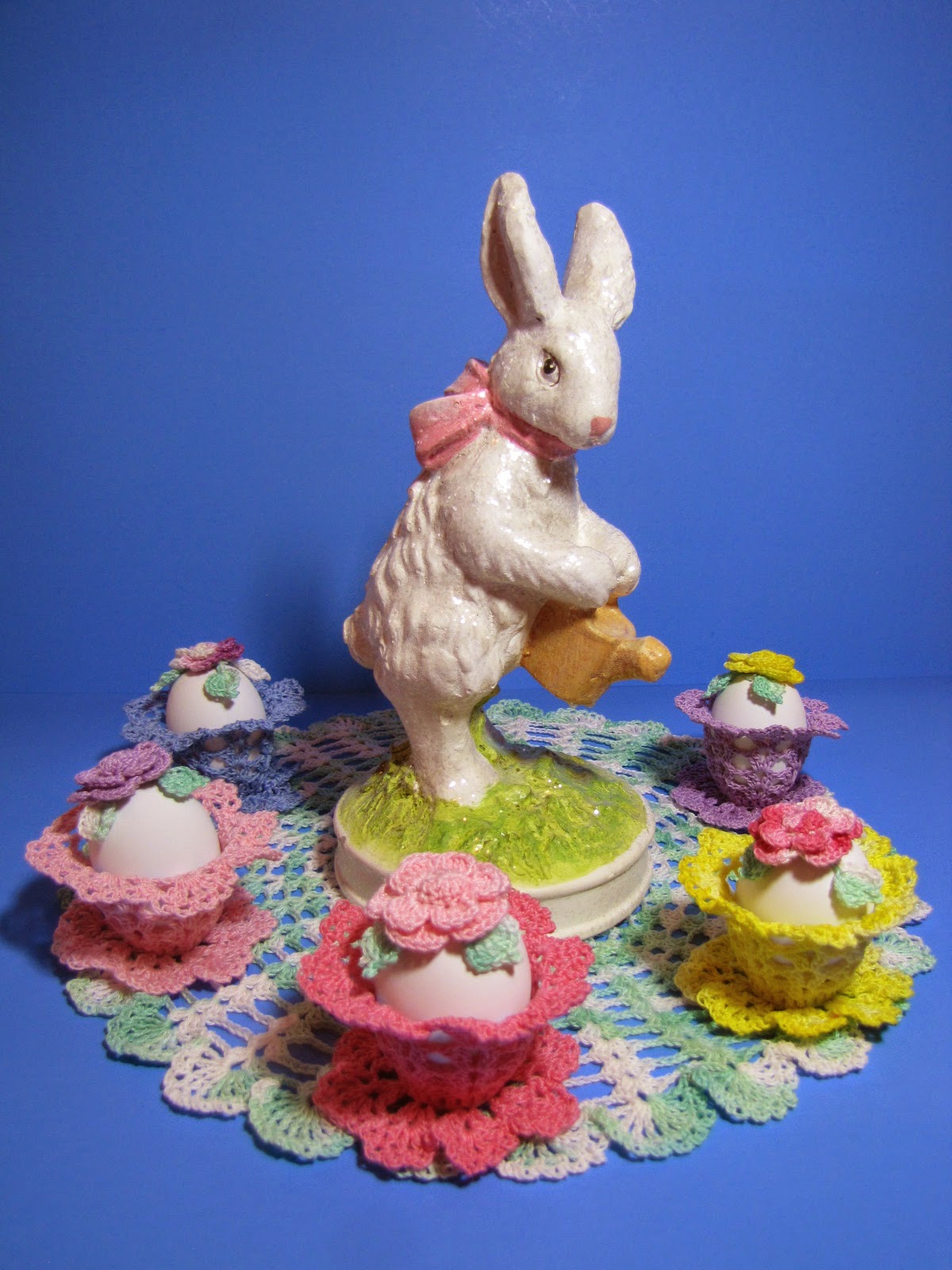 Special thanks  to the Easter Bunny's helpers and my wonderful testers, Jewel Fernley, Jolene Ortiz, E.J. Miller, and Rosina Smith! 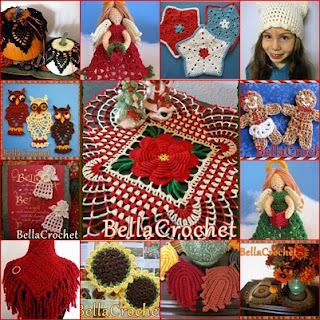 If you have enjoyed this pattern, I hope you will check out all my other free patterns: 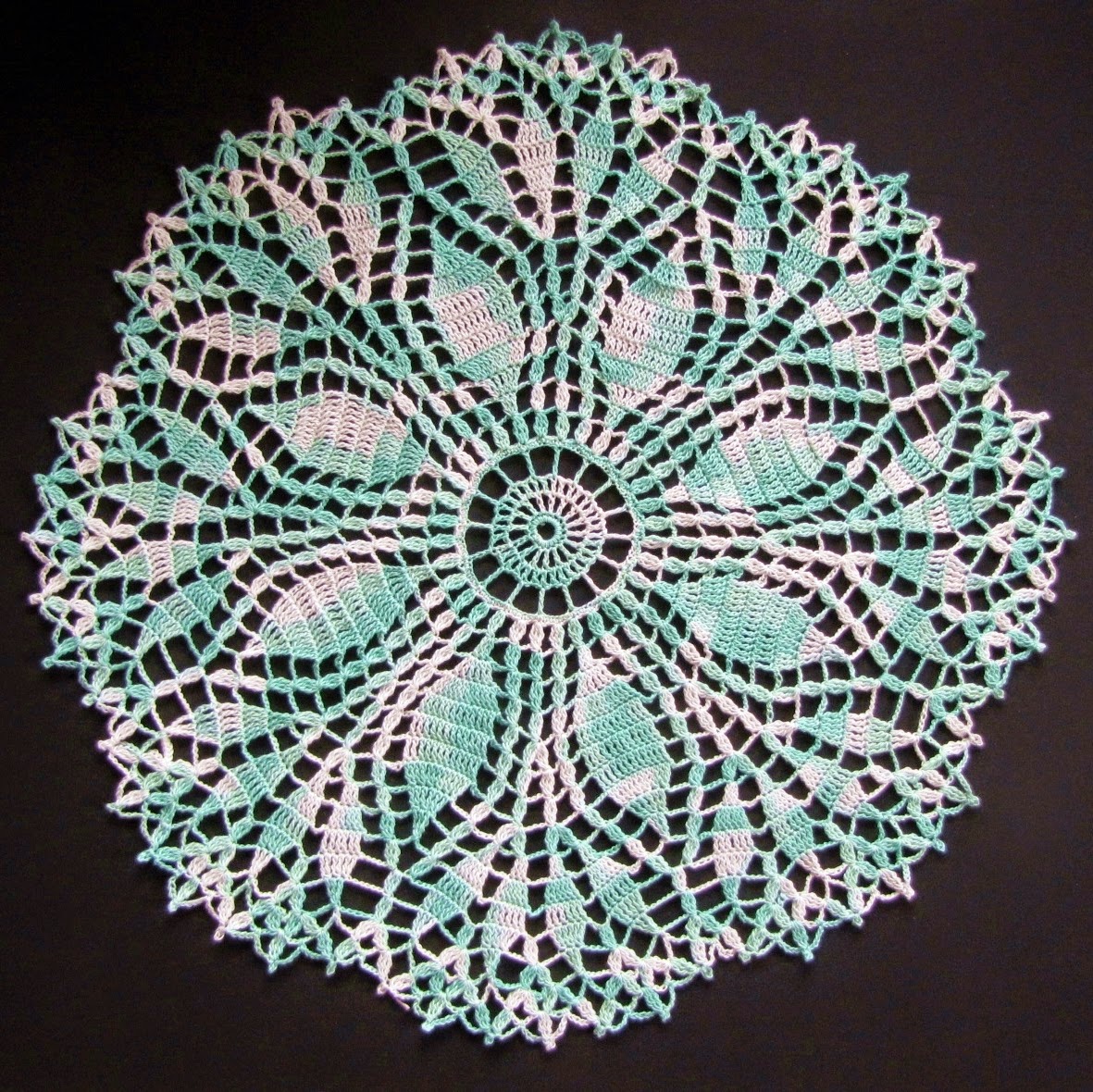 The Threadie's Facebook Crochet Along for March 2015 started yesterday (March 2) but I cheated a little bit and started mine last Saturday.
I finished it up last night, and I have to say, if you don't like making tr cluster stitches, this is not the pattern for you! 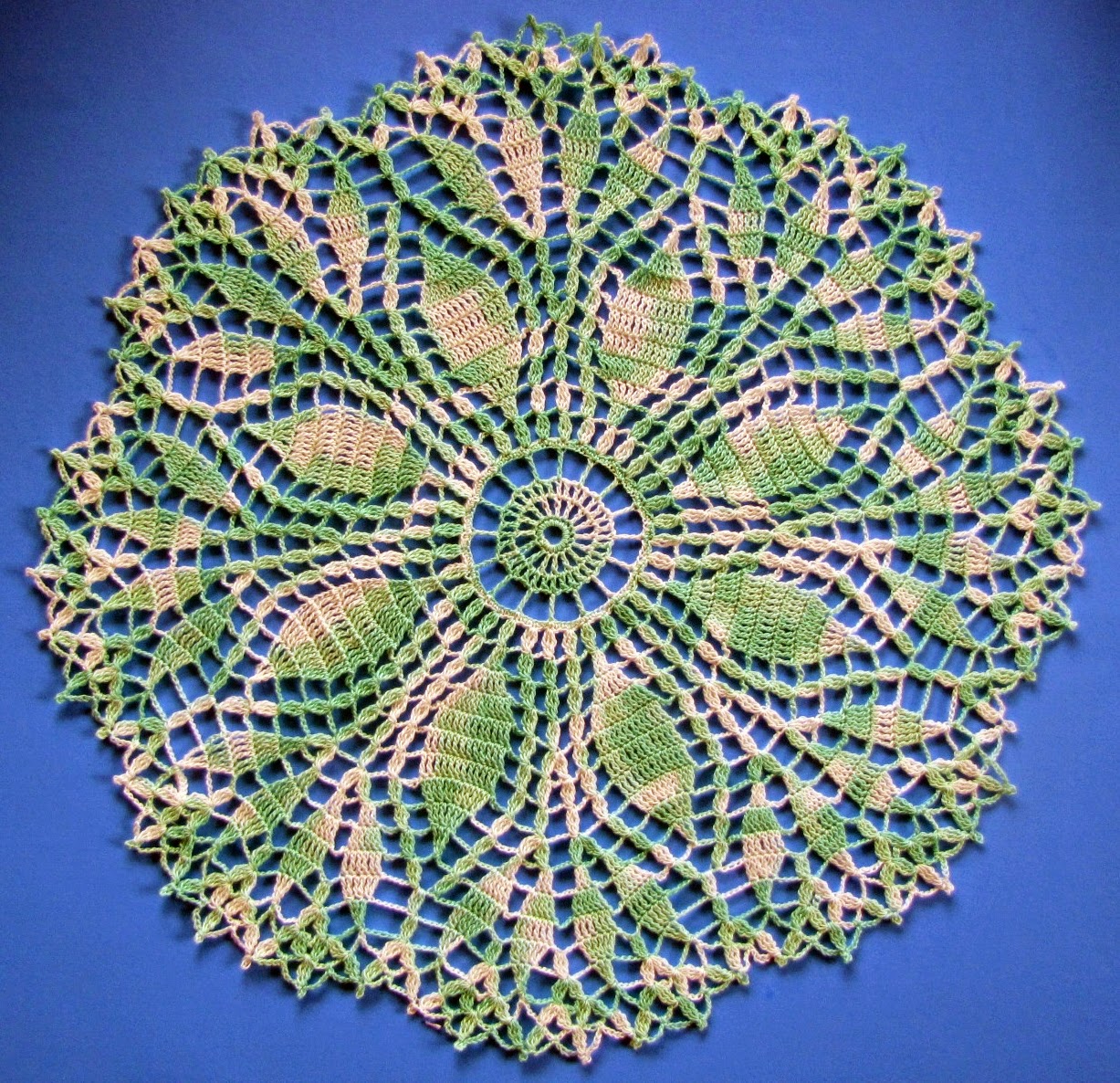 I made mine in shaded greens, to give it a spring-time feel. I really like how it turned out! 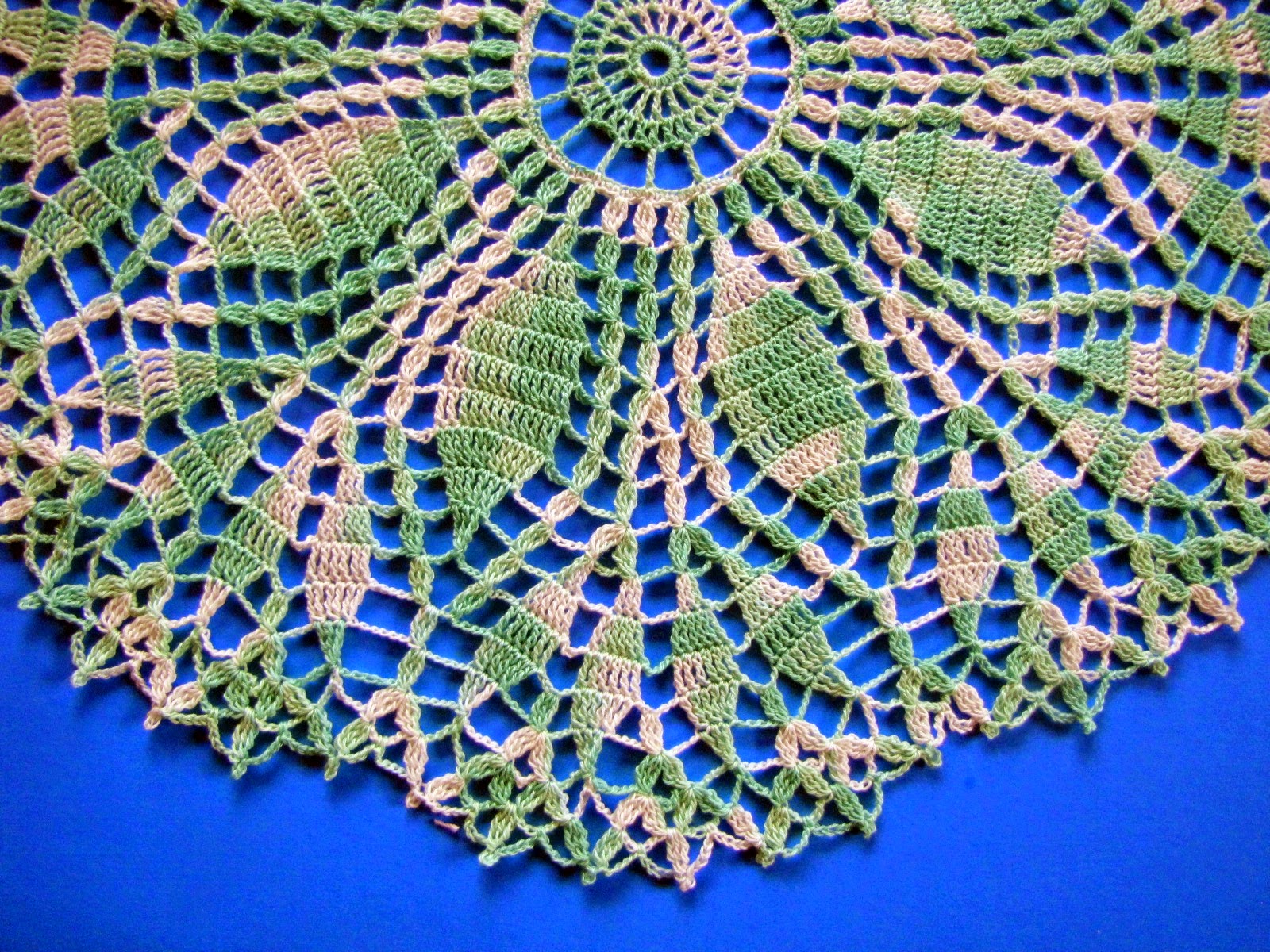 It is a vintage pattern, and a little bit confusing, but a good picture helps immensely! 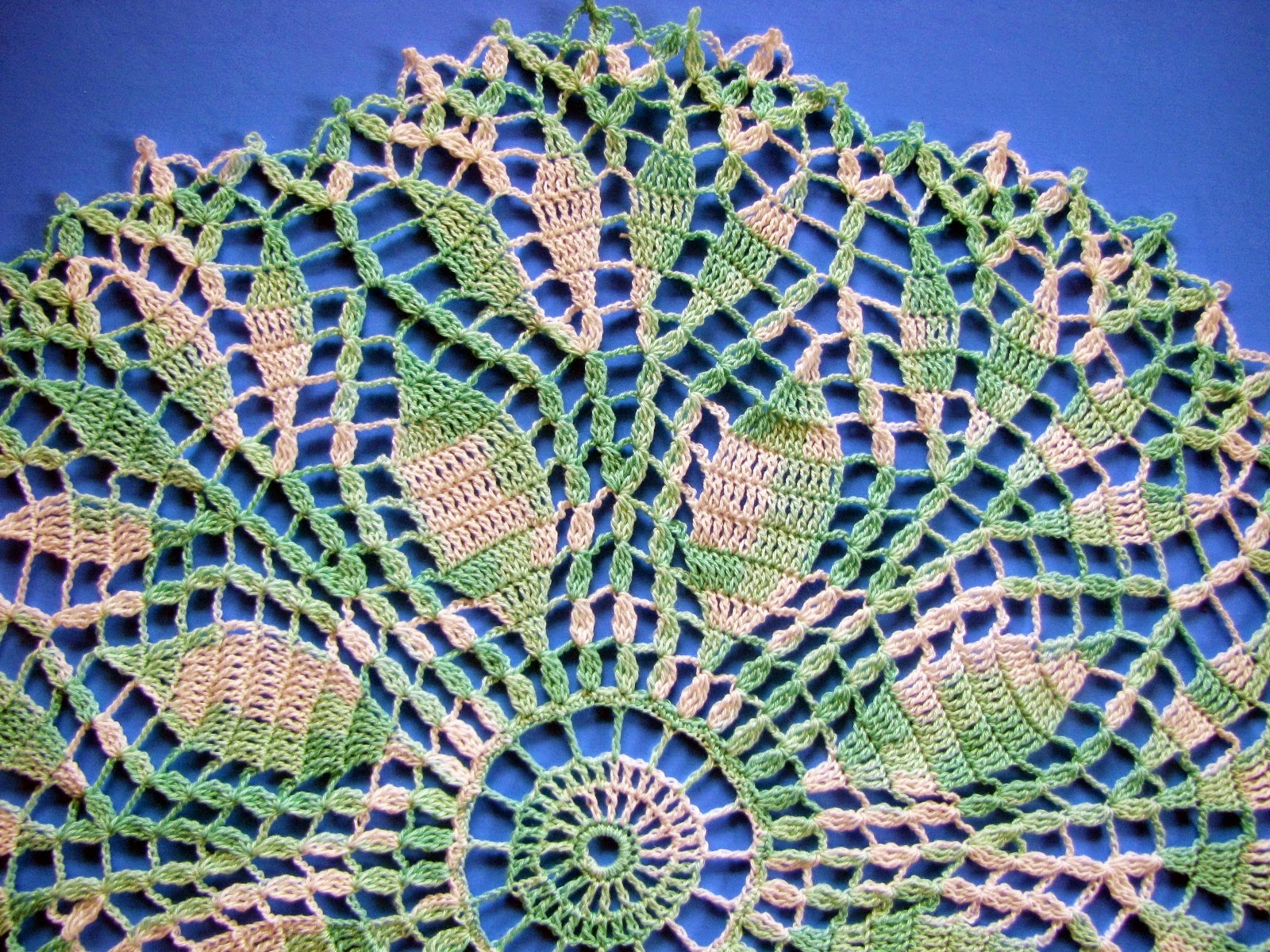 It is so much fun to see the other members of the group's doilies, everyone seems to choose different colors!

You can find the pattern for the Fern Leaf Doily here:
http://freevintagecrochet.com/free-doily-patterns/star137/fern-leaf-doily-pattern