The Hardest Thing I Ever Designed

I got an email from a sweet lady the other day, telling me that she had enjoyed making several of my designs, even though some of them had been challenging for her. She then asked, "what would you say is the most difficult thing you have ever designed?" 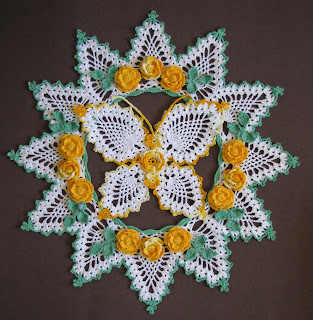 I thought about the Butterflies and Roses Pineapple Doilies, and the little Bag Holder Lady I did several years ago. 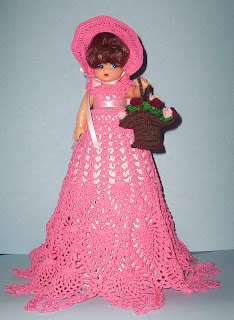 Both feature pineapples, which seem to make designing and pattern writing more difficult for me.
I thought  about the Celtic Rose Decorative Potholders, with their hundreds of increases and decreases: 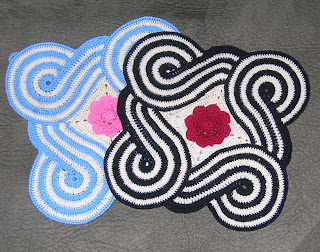 And as far as time consuming projects, it would have to be my Cherokee Rose Tablecloth: 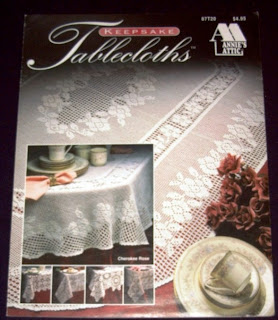 But even though these designs were challenging, I knew what the answer had to be. 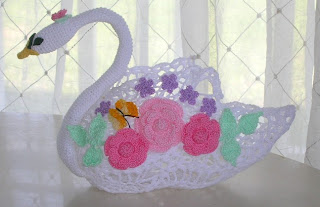 I worked on this design for about 3 months, trying to get her just right. I had seen an old crocheted swan in an antique shop years ago, and wanted to make my own version. I wished a thousand times that I had bought the old one, even though it was falling apart, just so I would have some kind of reference. I have since seen old mail order patterns for crocheted swans. But I wanted to create my own, and add Irish Roses and leaves to one side, like an old Lefton swan vase I have.
This was back before I was using testers, so I agonized over writing the pattern. Pineapples are notoriously hard for me to write, but I love them so much!
Several people have told me that they have won blue ribbons with this design; it is certainly eye-catching. On the other hand, I saw a comment on Pintrest the other day, wondering why on earth anyone would want to make such a thing.
But for those of us who love thread crochet and enjoy a challenge, I think it is the perfect project. I display mine in a cabinet in my office where I can look at while I work. I will probably never make another one, but I am so glad that I took the time to make this one.
It may have been hard to make, but I think it was worth it. 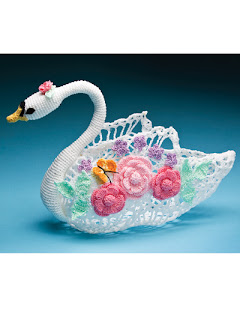 What was the hardest crochet project you ever made?

﻿﻿﻿﻿
Two of my greatest loves in life are babies and crochet, so I guess it is only natural that I love vintage crocheted baby items. Here are a few things I bought at antique shops years ago; I did not make them, and I do not have patterns for them, but I wanted to share them with you.

I wonder about the babies that wore these items; they would be older than me, now! But this just goes to show that if taken care of, thread crochet will last for generations.
Posted by Ann at 9:37 AM 8 comments:

Who Is Making All Those Crocheted Items?

Have you noticed how many big name companies are carrying crocheted items?
This is not a new trend; I know that as far back as the 90's, Walmart and other department stores were carrying crocheted doilies, tablecloths and even bedspreads and some clothing. I loved looking at all these things, and I still do, but I have the same question now that I did back then:
Who is making  all of these items?
Once at a convention this subject came up, and a woman I didn't know said, "They are made in third world countries, by poor women, and prisoners who are too weak to do other labor." Someone else said, "Oh, no, all of that stuff is made by machines," and the conversation turned to whether or not there is a machine that can make crochet. (There isn't; there is one that does a type of open-weave knitting that is called 'crochet' but no machine can do the loop-into-loop movement that it takes for true crocheting.)
Anyway, I wanted to ask the woman more about her 'third world countries' comment, but I could never locate her again. I don't know if she had first hand information on the subject or not, but I would love to find out.
I feel torn on this subject. On one hand, if the people (probably women) who are making all of these things are being paid fairly for their time and talent, I want to support them. I have made my living from crochet for the last 30 years, and I want to help others who are trying to do the same. On the other hand, if the crocheters are working 2 weeks on a dress and being paid only 2 dollars for it, I cannot in good conscience support it.
Most of us who have tried to sell our crocheted items know it is difficult to make a profit. People are just not willing to pay for all the time it takes to make a doily, afghan or toy. Now, just imagine all the people an item has to go through to get it into a big, nation-wide retailer, with each person along the way wanting to make a profit from it. Even though some of the dresses and other items are rather pricey, I wonder just how much  the person who actually crocheted it makes?
There are some 'fair trade' companies who do pay the crocheters a fair wage for their work, but  these are few and far between. I am afraid that most of the folks who are doing the crocheting are being exploited, and that breaks my heart.
If you have any information on where any of the crocheted items that the big retailers are selling are made, I would love to hear from you.
Posted by Ann at 8:06 AM 8 comments:


Every year, I write a list of the designs I want to do in the coming year. I very rarely get all of the items on my list finished, and never have I made them all as I originally planned. I get sidetracked, or have an idea on how to make something better, or maybe something just doesn't seem like a good idea any more. I try to stay flexible, and if I get a good idea I will usually drop every thing and go with it. Sometimes I feel like I am not accomplishing much, and it helps me to look back and see what I did manage to get done.
So here are the designs I published in 2011:


I am still working on my list of new designs for 2012; there were a few I didn't get finished last year, and still others that I have been thinking about for a long time. I want my designs to stay fresh and exciting, and I have a few ideas I want to experiment with.  I would love for 2012 to be my best design year ever; but only time will tell if I can manage it.
Posted by Ann at 2:02 PM 5 comments: