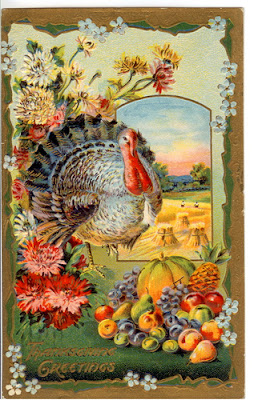 Every year at this time, I always pause to consider how very blessed I am, and to give thanks for the many things I am grateful for.
Of course, my family, friends, good health, and the blessing of living in a free and wonderful country come to mind right away.
But I want you all to know that I am also so very grateful for you, my customers, fans and followers. I give thanks for you everyday. You make it possible for me to do what I love- designing and publishing my own crochet patterns.
There are so many thousands of beautiful crochet patterns available today, and I know you all  have so many options when it comes to purchasing patterns. It is humbling to me that anyone would actually spend their hard earned money on one of my designs.
So, I want to say thank you from the bottom of my heart.  I appreciate each and every one of you. You are making my dreams come true.
Happy Thanksgiving!
Posted by Ann at 12:42 PM 3 comments:

I am always looking for ways to make crocheting easier, and I love to hear tips from other crocheters. Here are a few that were shared by some of my Facebook friends. They were first published in my newsletter, but I know not every one receives it, so I wanted to share them here as well.

Does your crochet thread have you tied up in knots? Rebbeca Kimmons has a clever solution! She says: 'When working with tiny thread that tends to tangle, I take a fabric softener sheet and just gently run it across the thread. It seems to keep down all the mess. I use the ones that are scented like lavender, so it it makes my crocheting more relaxing.'
When Jewel Fernley is crocheting Irish roses, she finds it easier to make the chain rounds from the wrong side of the work.
Is working with small hooks hard on your hands? Sherry Wade has a great idea you might want to try. Sherry puts shrink tubing (which she buys in the auto department) on the handles of her hooks, and shrinks it to fit. Sherry says, “I use a lighter, and hold the hook with pliers. I run the flame back and forth until it holds to the hook.” Sherry says the tubing makes the hook much easier to grip.
And here is one from me: instead of regular stitch markers, I like to use bobby pins when working with yarn. They slip in and out of the stitches much easier. For thread items, I use a stand of contrasting color thread. This works especially well when working in rounds and marking the first stitch of the round. Just pull the marker strand up and through the first st as you go. The strand should slip out easily after the item is completed.
Do you have a favorite tip you would like to share? I would love to hear it!
Posted by Ann at 9:23 AM 3 comments: 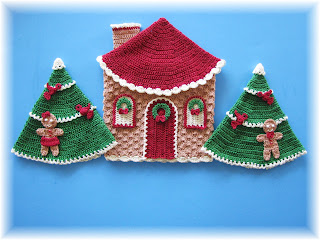 My second Christmas design this year is called "Christmas in Gingerbread Land Decorative Potholders/Wall Art." I really love how sweet and cheerful they turned out, and can't wait until I can hang them up in my kitchen (I am making myself wait until after Thanksgiving!)
While this kind of item has traditionally been called "potholders" they are really just for looks, for "decorative purposes only." They are made from size 10 cotton thread, and are just not thick enough to protect your hands or counter tops from hot pans or dishes.
I have run across several folks (mostly crochet magazine editors who do not crochet) who just don't 'get' it. "But you can't really use that to pick up a hot pan, it is too thin, it has holes in it!" they exclaim. That is why I also like to add the label "wall art" to my thread potholder designs. After all, I think they are little works of art, why not display them as such?
Anyway, I hope you like "Christmas in Gingerbread Land!"
Posted by Ann at 7:28 AM 11 comments: 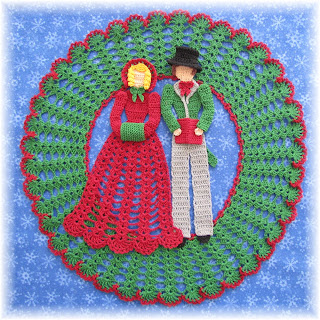 Can you believe it is less than two months until Christmas? I can't, but it seems to me that this whole year has just flown by. But, I have managed to get the eighth Lovely Ladies doily finished and listed on BellaCrochet.com. In keeping with my love of super long names, it is called "God Rest Ye Merry Gentlemen." This is the first time I have tried to design a male figure, and it was a lot of fun. I have all kinds of ideas for new doilies now; I can't wait to do a bride and groom! 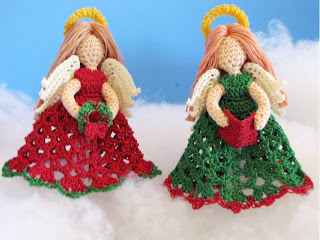 Here are "The Littlest Angels" who are the gift pattern that comes with purchase of the doily pattern. I think they turned out so sweet!
I hope you like them!
Here is the link:
Godrestyemerrygentlemen
Posted by Ann at 3:29 PM 7 comments:

Shirley Brown: A Crocheter In the Know!

While you might not recognize her name, if you have ever purchased a pattern from Annie's Attic or any of it's sister companies, you are probably familiar with Shirley Brown's work. Shirley is a technical editor for DRG, and does the technical editing for 'Crochet! Magazine,' as well as the crochet pattern books and leaflets. Since she began her career as a technical editor for Annie's Attic in 1988, Shirley has literally edited thousands of crochet patterns, in addition to many plastic canvas and a few knit and cross stitch patterns. 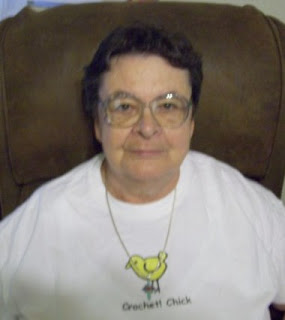 I first met Shirley in 1996, when I went to work in the Editorial Department of Annie's Attic, in Big Sandy, Texas. I have to admit, I was a bit intimidated by her at first. But I soon found out that behind her strongly voiced opinions and no-nonsense demeanor, there beat a heart of pure gold, and she quickly became one of my dearest friends. Shirley has kindly agreed to take a few minutes out of her busy schedule and answer a few questions about the technical side of crochet.

BC: How (and when) did you learn to crochet, Shirley?

Shirley: I am not sure of the when, somewhere in the 60's. My mother-in-law taught me to crochet. I think the first thing I crocheted was an edging to go around a dresser scarf. My mother-in-law got tired of doing the crochet trim so she told me I had to do my own. I learned with a size 12 steel hook. For a long time that was the only hook I had and I used it with everything, including yarn.

BC: How did your career as a technical editor begin?

Shirley: I started out as a tester. In January of 1988, I answered a newspaper ad for Annie's Attic. For my interview, I was given yarn, a crochet hook, paper and pencil and told to crochet and write a pattern for a leaf that was in a lily pond. I worked as a tester for about 6 months and then began to write patterns under another editor. I then went into verification (which meant that I checked the patterns that others had written) before I actually became a pattern editor.

BC: Do you have any guidelines you follow when you are editing a pattern?

Shirley: I always try to make each pattern as easy as I can for the customer.

BC: What was the hardest pattern you ever edited?

Shirley: Well, there have been several, but I think the one that stands out in my mind was a crocheted Noah's Ark. It was the complete ark with all the people and animals.

BC: Have you ever come across one you couldn't do?

Shirley: No, not really

BC: What is the most difficult part of your job?

Shirley: Making sure every thing is correct, which is why I have Nina Marsh (a good friend and another crochet editor) come and help me with the magazine and larger projects. She is very good at finding errors.

BC: What is the is the best part?

Shirley: I like it when a customer calls or writes to tell us she likes our patterns and that they are easy to work. Also I help with Pattern Services for DRG and I enjoy talking to customers and helping them with their problems. And it is a great pleasure to work with so many different and great designers. I really do enjoy my work and working with others.

Shirley has been married to her delightful husband Bill for 52 years. They are proud of their family, which includes 2 children, 11 grandchildren and 5 great-grandchildren. They enjoy traveling all over the world, and have taken cruises to the Holy Land, Hawaii, and the Caribbean. Right now they are getting ready to leave on a train trip and cruise to Alaska. But before you know it, Shirley will be back at her computer, turning out those wonderful and easy to follow patterns
Posted by Ann at 8:39 AM 3 comments: